Location–
-Latitude= 16°51’49″N   Longitude= 99°52’57″W
-Acapulco is 326 km south from the capital of Mexico, Mexico city.
-Acapulco is also about 2,340 mi south of Elkhorn, WI.
Place–
-Gulf of Acapulco is a popular characteristic.
-Throughout the year the temperature is an average of 90° F high and 75°F low.
-With that kind of weather the only main type of precipitation is rain which is mostly in the summer. 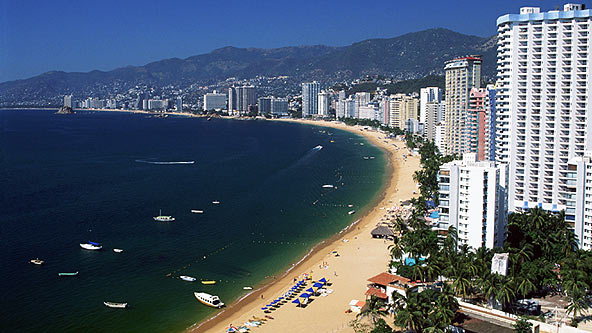 -There are also many hills within the city of Acapulco.

–There are about 718,000 people in the city of Acapulco
-The many luxury hotels along the coast line and houses on sides of hills gives people shelter.
-The beaches of Acapulco are great for swimming.
Movement
-73% of the economy is based on tourism.
-Acapulco also manufactures bottles, milk products and produces energy.
-Agriculture is involved in the movement of goods from Acapulco such as tomatoes, corn, chili peppers, and other fruits and vegetables.
-Many tourists move in and out of Acapulco for vacations.
Human-Environmental Interaction
-Since there is a large body of water nearby, the people spend some time in the water fishing for recreation and economic purposes.
-The people of Acapulco preserved most of the natural landscape when creating buildings and homes.

Region
-Acapulco is in the Guerrero region which is similar to a state in comparison to The United States of America.
-It is also known to be located on the southern coast of Mexico by the Pacific Ocean.

Welcome to your brand new blog!

This is a sidebar and can be changed by going to Appearance > Widgets in your dashboard.